According to an article on Salon.com, Roy Moore still hasn’t conceded the race and is angrily pumping his base for contributions. He has now raised another bogus issue: voter fraud, and is insisting on a recount. If this truly infantile behavior is worth noting, it’s because what’s happening in Alabama is similar to what is happening in the USA: Lies, distortions and conspiracy rhetoric are wasting people’s time and energy, and the tax payer’s money, casting a shadow on serious and real issues, and generally degrading democracy and its processes. 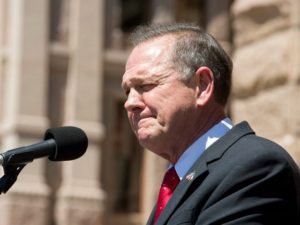 There is nothing surprising here. Moore was sure he could win, even with the strong allegations (from nine different women) of impropriety towards young girls: Deep red Alabama was willing to overlook this “minor” stuff – no pun intended – and go with their evangelical blusterer. And business being business, Moore is now trying to make the best of it. The number of absentee ballots can never make up for the missing votes, so the least he can do is see that the dollars and cents stack up in his favor. What caught my eye in this story is the following paragraph:

“The Confederate-sympathizing Republican claimed that he was “in a struggle to preserve our republic, our civilization and our religion.”
“Today, we no longer recognize the universal truth that God is the author of our life and liberty,” Moore said. “Abortion, sodomy and materialism have taken the place of life, liberty and the pursuit of happiness.”

There’s a great deal to deconstruct in these Moorish quotes, trite as they may sound, notably all those lofty words like life, liberty and the pursuit of happiness.

First and foremost, as a run-of-the-mill conspiracist, Moore reframes what is a simple case of losing an election in ever greater contexts. It used to be about Moore and his bizarre and graphic concerns about gay sex (why he thinks about it so much is a mystery, but it would square with his leaning towards the young and inexperienced). Then it was Alabama. Now it’s about civilization itself. Soon, I guess, the galaxy will be somehow threatened.

That people still fall for this stuff is remarkable. I’m all for the simple life, but that does not mean one has to give up thinking altogether. Doesn’t the USA have a very good system of public libraries? Even the Internet, if searched properly, can reveal a few good nuggets of information buried in the alluvium of tripe and nonsense.

Second: There appears to be a glaring contradiction between Moore’s blustery talk of “liberty” and his storming against materialism and sodomy. Abortion is essentially a health issue, any moral aspects are simply too complex to debate here, but they, too, are personal, like the other two targets of Moore-ish ire. All of these issues are essentially personal and require benevolent protection.

Finally, there is this: The one Moore bugaboo that really stands out is materialism. We have to assume that for him, materialism simply means the adoration of material things, like money and consumer goods, instead of some unilateral focus on divine revelations and the collected wisdoms of Roy Moore. But is the acquisition of worldly goods not an integral part of the American experience? Do US citizens strive to live under a bridge, sleep on cardboard, and heal their raspberries with rancid bacon fat from the McDonald’s dumpster? What is Merry Christmas without a rush to spend, or Thanksgiving  without a Black Friday and Cyber-Monday? Buying stuff is part and parcel of the American experience, it is the ultimate proof of some manifest destiny. I buy, therefore God smiled upon me. The entire tax bill, which Roy Moore supports, no doubt, is based on the idea of putting money in people’s pockets, allegedly. 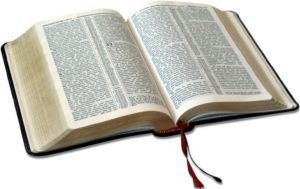 Going a little farther down this road, let us remember that materialism is in reality a philosophy with ancient roots. Basically, it states that life and all existence we perceive is material, which, to simplify, could mean three dimensional. This simplistic reduction becomes far more complex if we account for quantum mechanics, perhaps. But for the purpose of Mr. Moore and his base, it probably suffices. And according to him, focus on the material is sinful. Because it is not “spiritual,” one can only guess.

Here’s the problem. Moore is a fundamentalist, in that he demands that his flock take every word of the Bible to be true as written, no interpretation allowed, no doubt either. You believe it, because it’s there. The word of God needs no salt and pepper, just a lot of rhetorical tabasco, needs no unpacking and preparation. This means two things. First, he and his flock have to seriously cherry-pick the holy book in order to explain his visceral (or profit-oriented) antagonism to anyone and anything that fails to pass the bar of his many prejudices. Secondly, in rejecting any interpretation of the Bible, he and his apostles are in fact performing a highly materialistic act. They are treating words and concepts as reality. And they do this, I suspect, because any form of interpretation or questioning of the Good Book would, in fact, bring their latent doubt about their faith to boiling point and collapse their belief system. So they tend to double down and stay in a small, musty bubble.

Not that this matters much to the true believers.

One Response to “Katzenjammer”