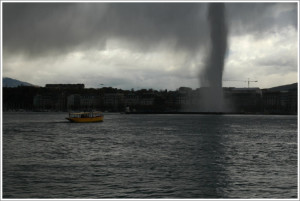 Storm on the Léman

Perhaps the title of this page should repeat the title of a book by Anthony Heilbut published in the early 1980s, Exiled In Paradise. But a hint of Adorno seems appropriate here. The great German Critical Theorist also featured rather often in that book about German exiles in the USA during the war.

My place of residence is Geneva. Off the bat: I am neither an expat, nor a tax evader, nor a member of the international coterie of passers-through, nor a wheeler-dealer, nor a banker, nor  a trader. I do speak French fluently, thanks to a childhood in Paris, so I sort of fit into the local scene. I may be an exile from nowhere in particular.

About Geneva: It’s hard to say the city is Swiss other than politically. Many say the confederation actually starts in Lausanne. That may be correct. Genevans, a fairly small community, have a differentiating attitude towards everyone. Paris is the city’s role model. As a provincial place, it does try to emulate the world’s true capital, but it suffers from terrifying sibling rivalry.

I have known Geneva  since I was 17, in the mid-1970s. Back then, I could think of no better place to live. It had a lively cultural scene, it was quietly bourgeois, the UN and related organizations lent the place an international feel. It was also a place that attracted all the parties to the Cold War, and so its chords always included a few wicked notes, shady characters, cultural driftwood, dissidents, and other exiles.

The posts here will offer views, news, ideas, and even hints at what to do around the city and canton.