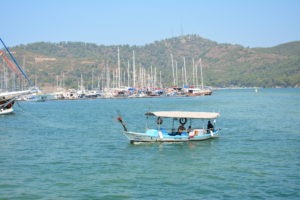 Freelancers and the self-employed seldom go on real vacations. Especially since the advent of instant and frenetic communication, which keeps us in line better than one of Calvin’s egregious ordonnances.  But….

… when I do choose to step out of the daily grind, it’s usually to go someplace where the electronic cookie monster is less active, or at least where the barriers to get online are higher or impossible to surmount. It’s a bit of a risk, of course, clients are impatient, but it’s only for short periods … This year, 2019, thanks to some friends and neighbors, we went on a seven-day boat trip exploring the Gulf of Fethiye on the southern corner of the country’s western coast, near to where the Mediterranean meets the Aegean. 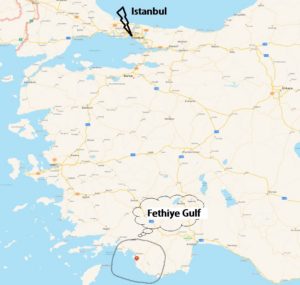 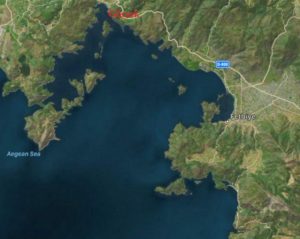 Fethiye, a bustling town of about 80,000, is in fact a vacation destination in Turkey, which explains why the plane from Istanbul, a massive 777, was packed to the gills. It landed in Dalaman, after which we took a bus to Fethiye to spend one night in a pleasant hotel by the sea. The next day, we met up with our friends from Geneva, a Turco-Swiss family, and headed to the pier, where the Seahorse awaited, fueled and stocked up with food and water, of course.  The boat is a gulet, a traditional two-master, whose sails, I later found out, are not really used anymore, unless there is an emergency. The boats were used for carrying freight and are therefore quite large and tend to roll easily. 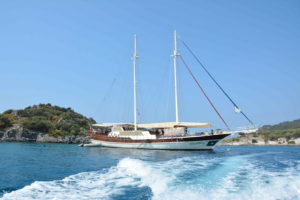 By midday on the 3rd ,  the seven expected families were now all on board, the bags were stashed in the cabins (each with a small bathroom), which were fairly hot and musty. No surprise, since the temperature outside was about 37 °C. They would be air-conditioned twice or three times a day to avoid wasting generator fuel, I guess. As it turned out, hardly anyone slept in the cabins anyway, since the weather was dry throughout…. 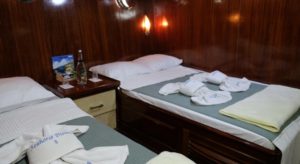 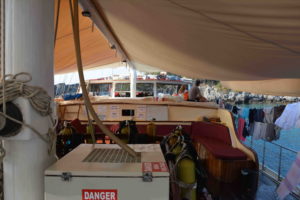 The teenagers on board rapidly occupied the sea of mattresses over the wheelhouse, which gave a spectacular view of the night skies. Others found space over the cabin section under a canvas an acre in size that kept all protected from the imperious sun. I staked a claim on the generous divan aft, which gave a glimpse of the sky and left enough space for my legs…

In addition to the twenty-one passengers, there were six crew members. The captain and owner of the ship is Mehmet Avcu, a wiry fellow with a deep knowledge and love of the sea and the local history.  A 20-plus year stint with the Turkish Navy left him with a slightly commandeering tone, but whenever we had a question about strange creatures or local lore, we could just pick his brain. He was the boss on board, as tradition has it, and his word was gospel. He not only steered the ship to the right places and kept operations running smoothly, but also turned into a veritable encyclopedia of information about marine life and local history. Spotting that some of us were also interested in the region, he didn’t hesitate to take us on tours onto the land. One day it was an island with a few Byzantine ruins and a few of goats, another time it was to visit a farming settlement on a spit of land sparsely covered with olive trees, Turkish pines, carob trees… . 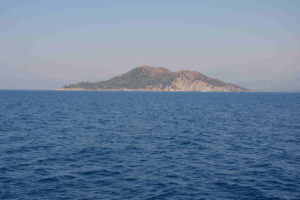 Kizil Island in the Gulf 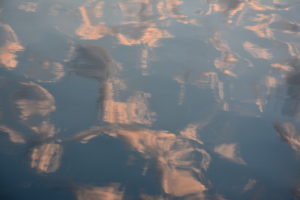 Sea and sky in the early morning

We set off. The sea was slightly choppy for the first hour or so, giving all a chance to test their seaworthiness. We soon found a quiet space at the foot of a craggy mountain – all mountains are craggy here – in a pleasant cove, where lunch was served on the deck aft: plates of different salads and vegetables, broccoli in a lemony sauce, a dish of charred eggplant, rice pilaf, a mixed salad, and purslane simply dressed with yogurt (a ubiquitous sauce in Turkish cuisine, it is a little richer than many yogurts available in Europe). The salt and pepper on the table was augmented by a jar of pul biber, crushed red peppers, and a bottle of nar ekşisi, a sticky, sour, fruity balsamico made of pomegranates.

As for activities, well…. swimming, snorkeling, and, for a surcharge, diving with aqualungs. The younger ones quickly discovered the thrill of flying off the taffrail, while the adults usually used the starboard ladder to get down to the sea, which was, as usual, blue and clear, and very warm. Two of the teenagers opted for genuine diving. I chose to snorkel with my 15-year-old daughter, who received her real salt-water baptism in these glorious waters.

A few hours after lunch, we raised the anchor and moved off to another cove for dinner (always around 8 pm) and to spend the night. A few more dives into the dark and inviting waters closed off that first day. Quickly, 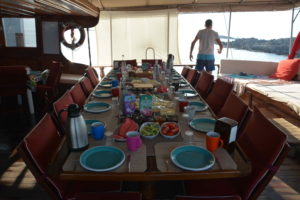 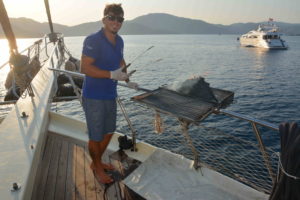 almost surreptitiously, all made their respective beds and went to sleep. The sea was mirror calm, but with a gentle swell that rocked boat from side to side. It was like being in a cradle again. Other boats could be seen (as every night thereafter) in the night, their position lights vying for attention with the stars, those points of safety that have shepherded mariners across the Seven Seas for eons. At some point in the night, the cicadas went to sleep, apparently all at once.

This established the pattern of the next six days. Three opulent meals shared at the large table punctuated the flow of time. Breakfast with cheeses, jams, fruit, and eggs sometimes hard-boiled, sometimes scrambled or fried; lunch with an array of cold dishes, rice, stews; dinner which sometimes included charcoal-broiled fish or meat done on a curious grill hanging off the starboard rail near the bow. And always accompanied by the delicious Turkish breads also made freshly onboard. One night, after a few glasses of raki loosened the limbs and spirits, there was some singing (Turkish love songs, an old Viking song in Swedish, …) followed by dancing on the forever gently swaying deck. 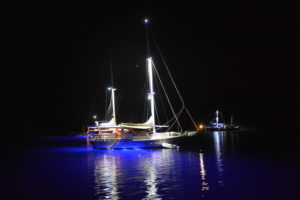 Time on the Seahorse flowed quietly along, with endless hours chatting, staring out to sea, reading, playing cards or backgammon, and naturally swimming.  The use of goggles to swim made the activity far more interesting than the usual lengths in a pool. The rocky seabed made for particularly clear water, through which one could see small colonies of long-spine sea urchins and strange sea cucumbers resembling bits of 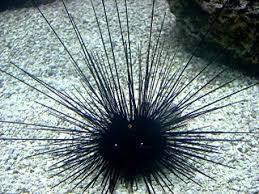 rubber hose. We spotted a few small rays, otherwise  there were just schools of minnow-like  fish, who would scamper away when we came near them, glittering in the sun — though one passenger did try angling, without success — but did bring back garbage that others had decided to dump into the sea, plastic bags, empty cans, metal caps, and bits of rope. 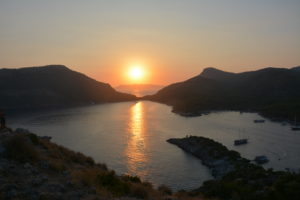 The view from Gelimer Island 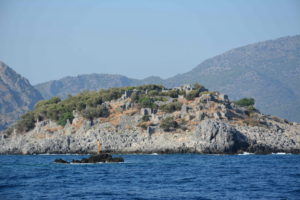 Every now and then we’d leave our floating home to rejoin the community of landlubbers. One time it was to the diminutive Karacaoren island to stagger through Byzantine ruins and untamed brush in 40-degree heat. The next expedition was to Gemiler Island to explore more Byzantine church ruins and watch the sun go down in a spectacular canvas of warm colors.  One fellow who allegedly walked these rocky, dusty, rugged slopes was none other than St. Nicholas of Myra, the gentleman who later became Santa Claus. While that does sound a little stretched, one does wonder how in earth people back in the 6th or 7th centuries built these fairly large structures, or the spectacular covered staircase that leads up to the highest church? 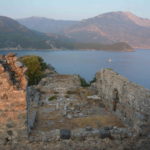 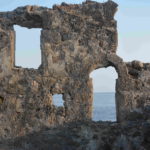 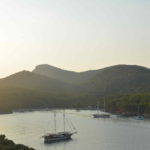 It was not all Byzantine. Göbün, on the northwestern entrance of the gulf, features some Lycian graves that were up on a cliff side (unreachable in the burning sun) and the remains of a Roman bath now half submerged. The narrow  strip of land is inhabited by farmers in jerry-rigged dwellings. According to Mehmet, they are more or less squatting the land and arguing with the government for official rights to it. 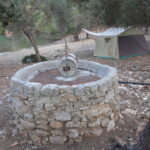 On a more contemporary note: We also stopped at the port of Göcek, a favorite hub of yachtsmen apparently, whose presence spawned numerous chic shops and restaurants mostly with inflated prices. At the entrance of the bay, a long, stern-grey, ship-sized yacht, the 126-meter Flying Fox, allegedly belonging to Jeff Bezos. No one was quite sure. There was some buzz on board about that.

All in all, it was a beautiful trip. In retrospect, the coves and inlets, bays and beaches flow into one another in memory. The conversations were fun, sometimes rich. I scanned some of the books fellow passengers were reading and found one crew member reading a work by Tolstoy, the title was a question, so it may have been the essay “What Is Art?”. On the crew’s kitchen table lay a book on Latin America. Another was reading Bulgakov’s Master and Margerita.  In fact, I was told that Russian literature is popular in Turkey… By the time we returned to Fethiye on Friday, we had all made friends, created a WhatsApp group, and sworn contact with one another.  Stepping onto the hard pier was not all that easy. The sun, now untampered by the sea breeze, hammered down, and the speed of the small town For days, our blood had been rocked by the sea, and, as if by dint of resonance, our bodies continued to feel the motion for days. 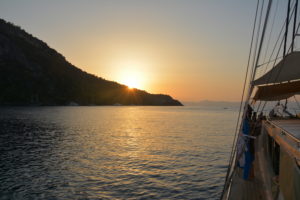 2 Responses to “Vacation Interlude in Turkey”