Baselworld 2019 was quite exciting even without a slew of major brands, which stayed away this year.

The trickle of brands leaving Baselworld a few years ago turned into a torrent in 2018, with Swatch Group packing up its castle and kaboodle and leaving a big space free on the ground floor of the main hall in 2019. For the media, it was not a bad deal, since the press center was installed right there in the heart of things.  And it left a lot more time to visit those who were at Basel…

Five days, about forty-five meetings, three interviews and many spontaneous conversations about all sorts of topics cannot by any stretch of the imagination be properly condensed into a single article, and these days, even scrolling seems to sap the energy of the online reader …

At any rate, all shapes and sizes were on display, and all price ranges, from Urwerk’s AMC with an  atomic  time-setting machine already seen at the SIHH and going for around $2,700,000, to the delicate regulator watches of the Münster-based company, MeisterSinger, whose prices begin at around $800.

A coup de coeur is a French term indicating something that takes your breath away.  And this Baselworld was quite rich in these, so here are a few that I picked up along the way, certainly not an exhaustive list… And there will be follow-ups for certain brands:

Day one,  Wednesday, March 21. My first appointment was at 1:30pm at the Ateliers , site of many smaller brands (Czapek &Cie, MB&F, Urwerk, Louis Moinet…the usual  suspects).  Being quite early, I sauntered over to ArtyA, where Yvan Arpa was setting up along with his extremely talented artist wife Dominique, who contributes her creativity to many dials, notably of the Son of Earth series. Arpa is a small fellow, the way a 300-Watt bulb is small.  He’s exuberant, full of vim and vigor, and very direct, which always makes for terrific banter.  He started laying out the novelties and other pieces the company produces, rapid-firing  the details, a watch with a dial of spokes inspired from motorcycles (“…each one is hand assembled.”),  the Son of a Gun Extreme with the 6mm  rounds in the dial,  a brand new Megève with the dial carved like a snowflake. And then there was the Son of Earth Butterfly Iridescent, which was a genuine coup de coeur. It’s a simple three-hander (essentially dauphine hands), powered by the ArtyA  automatic Aion movement (made in collaboration with Concepto, 28,800 vph, côtes de Genève, 25 jewels). The beauty is the natural mauve iridescence of the single butterfly wing that almost covers the dial and catches the light every time the watch moves. The luminescence reveals the structure of the wing and gives the dial depth, as if you were looking into a magic fountain filled with mystically glowing water.

Same day, later…. An annual pilgrimage to the small booth of Itay Noy, whose watches – all in limited editions – engage the beholder in a conversation, usually about something larger than just time. And so his timepieces become like small poems, chrono-haikus, or philosophical fragments, or simply good old friends you like to meet over and over again… I haven’t asked him yet for his own interpretations (in my Maximalism, for instance, I see solid straight roots/rationalism on the lower half of the dial, and turbulent, baroque thoughts on the upper half…), in part because discussing it would be like writing the first sentence of a story, which will create certain inevitability in interpretation. 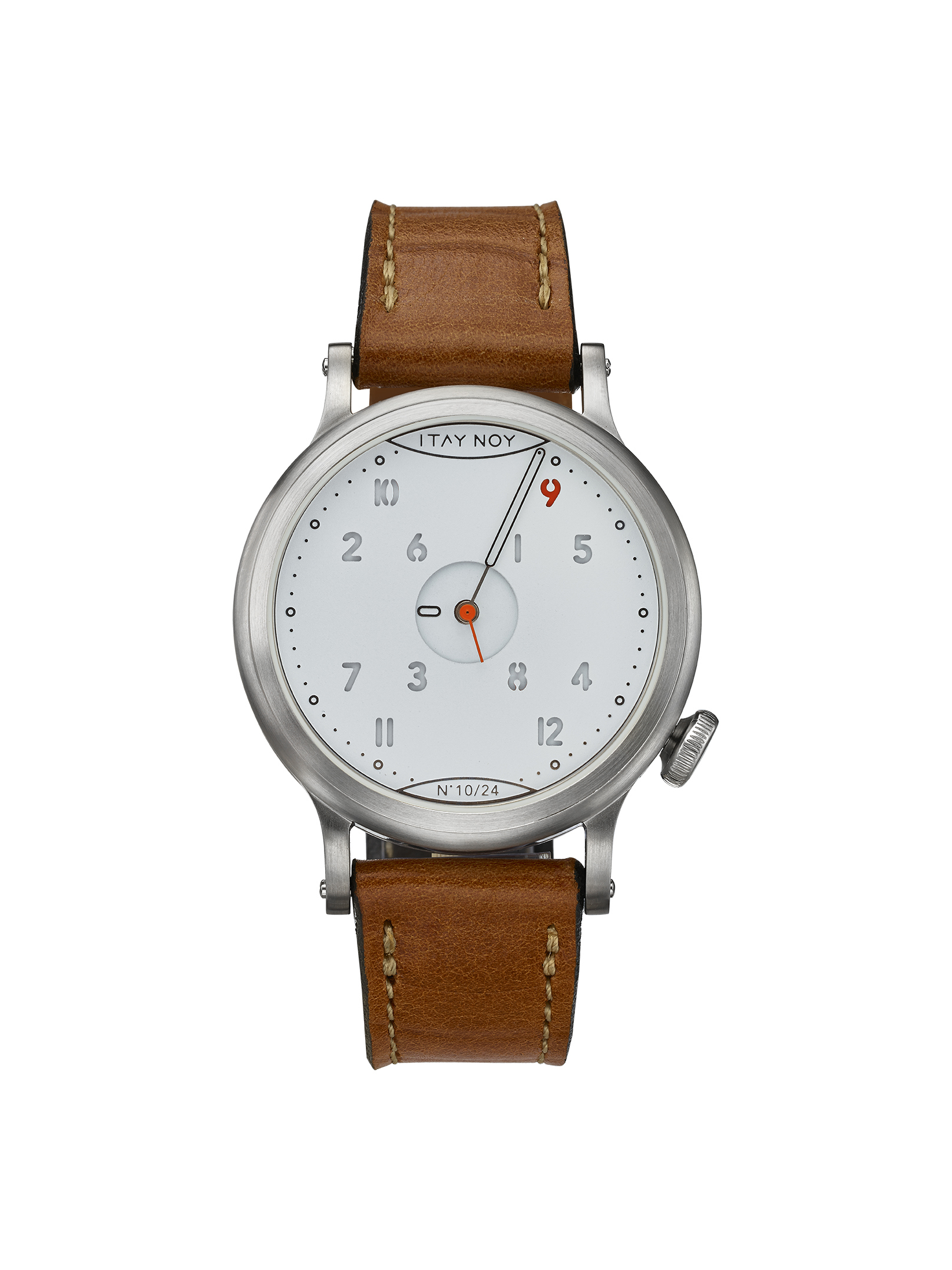 Noy’s  concept of “dynamic dials” brings liveliness to the wrist and opens many possibilities for the creative watch designer. But what could be a worthy successor to the Full Month, which tracks the day using thirty-one numbers painstakingly cut into the dial over a disk that turns the right number red?  The answer is simply Reorder. Also a sandwich dial, but this time it’s the hours that are cut haphazardly into the dial. Noy prefers not to explain the system he developed to display time in this fascinating manner (no, it’s not as strident as Franck Muller’s Crazy Hours). It’s not about omerta, but rather to keep the mystery alive, he told me. “If you know how the magician does his tricks, it’s no longer any fun to watch.”  The watch features the movement he worked on together with a little company called IsoProg.

Art and the machine

One brand that has shown remarkable resilience in spite of recession and fitful starts and stops is Hautlence. Their products – 1970s-styled, television-shaped timepieces with intricate engines inside – are not for the faint-of-heart, nor for the classical purist…. Let me put it this way, if it were music, a modern Eduard Hanslick would  have had a fit. But, but, but:  You can’t deny the effort and the technical hijinks that go into these odd pieces. Becoming a member of MELB Holding, run by

Georges-Henri Meylan, kept Hautlence in the market … After five years, according to Nathalie Cobos, the company came up with what should by rights be a winner:  the HL Sphere. Its most striking feature is the hour display on the left of the dial, a kind of blue globe engraved with numerals that travels on three rotational axes to give the hour. To the right is a retrograde minute display with a special twist. Thanks to a set of braking gears, the minute hand travels back to the big double zero  at a moderate pace. It allows one to really watch the mechanism at work, from both sides, if necessary, especially considering the artistry of the four conical gears that drive the “hour bubble,” as it were.

Hautlence’s group sister, H. Moser & Cie, has been making a name for itself these past years, though without ever changing its essence:  minimalism. In January at the SIHH (Ed. Note: the review is still being tweaked), it presented a watch with a tourbillon, and that’s it. That didn’t mean the owner couldn’t tell time. The watch had a minute repeater as well.  Very clever, but it was merely a prelude to the  Endeavour Concept Minute Repeater Tourbillon, which has two hands and is all the more practical for it.

The dial is more exciting thanks to the two repeater hammers have been placed on the dial side and stand out sharply on the black lacquer dial. Not surprisingly, Pierre Favre and the Manufacture Haute Complication is behind this double whammy, the same company that provided the engineering  for ArtyA’s combo double-axis tourbillon with three-gong minute repeater.  The H. Moser piece distinguishes itself by being of manageable size (ø43 mm x 14mm) and with its white gold case, it’s not too showy until one looks a little more closely…

I could mention at least a dozen other watches that made the trip to Basel well worth every minute. Nomos, for example, has gone sportive, with new additions to its Neomatik line that will thrill swimmers who refuse to wear some pedestrian waterproof watch. This sleek timekeeper can take a 300-meter dive. Note, too, the unique bracelet of tightly assembled slats that look like the smooth scales of a supple aquatic creature. From the same region, Glashütte, comes the magnificently elegant gold Tutima Patria with power reserve and a green Flieger that is taking the brand into a new era of color… all material that will show up in Wristwatch Annual 2020.  Some 40 kilometers from Glashütte is Dresden, home to another maker of classically fine watches, Lang und Heyne (see the Moritz, below).

The children are OK

Almost too perfectly, though, my last two meetings of the fair were with “watch-men” whose idea of design is very similar though the outcome is different.  The first man is Chris Long, founder and CEO of an unusual brand called Azimuth (which has been in Wristwatch Annual for as long as I can remember)….  A watch lover from his days as a student engineer, Long has never lost his youthful sense of humor and playfulness, and they pervade his brand’s output.

There is, for example, the Landship, a homage to the first tanks of World War One.  Or the King Casino, with a baccarat and roulette function. There are some simple regulators (Back in Time),  or more complex ones, like the Predator series, which feature a large fang-like minute hand with an opening at its base that reveals the hour on a disk, the whole thing skeletonized for lightness.  Others are inspired by sports cars (the Gran Turismo or the Twin Turbo) … When we met at the Swissôtel Le Plaza bar,  Long was wearing one of my favorites: The Mr. Roboto, now in brass, a face, with regulator hours, and small seconds for eyes, and a mouth housing retrograde minutes…. inside,  a movement modified in-house. More to come on this remarkable brand and its CEO.

Serendipitously, my final appointment of the fair was with MB&F, a brand with a similar vibrancy as Azimuth, though on a different level altogether. Founder and CEO Max Büsser,  the creative impulse behind MB&F, not only makes watches and clocks that do more than tell time; they function equally well as works of kinetic art, and like art, at times they turn the world upside down. Büsser works with a growing roster of “friends,” experts and paragons in their own fields, so the engineering and finishing are always top notch, and each new “machine” is unique. But so far, the watches were always inspired from external objects or ideas. The latest in the Legacy Machine is far more personal, as a quote on the MB&F website suggests: “I wanted LM FlyingT to possess the epitome of femininity as reflected by the women in my life, particularly my mother. It had to combine supreme elegance with tremendous vitality.“

“Flying T” refers to the flying tourbillon that is built up vertically in the center of the dial and topped with a single diamond.  The area around it comes either in diamonds, a snow-covered field,  or in plain black, a deep sea. And at 7 o’clock, a small watch face, stares at the wearer from a perfect angle. It means an intimate moment with time, excluding all others for the duration of a glance . The entire dial is under a vaulted sapphire crystal, which instantly suggests one of those globes, which, when shaken,  produces a snow storm. All that’s missing is a dancing ballerina atop the flying tourbillon. Instead of a dancer, though, the tourbillon is topped with a single diamond.

The Flying T can be read at a deeper symbolic level as well, perhaps channeled by the designer.  The little dial recalls the moon revolving around the earth. The smooth rounded crystal could symbolize the rounded belly of a pregnant woman, or even a breast, traditional symbols of life itself. And the transparent case back reveals a special rotor, a voluble sun, symbol of nourishment (as Büsser himself states), and also of masculine energy and that of the visible world that meets the mysterious lunar world of the feminine.  Of the many complex watches that have emerged from the MB&F forge, this one, in its apparent simplicity, is perhaps the most complex and the one with the most profound story. It tells us that there is a lot more in time than meets the eye. None of us will survive time, but there’s hop in the cycle of death and life, and the magic of procreation that runs through the feminine.  The one woman from Büsser’s life who did not see this gem was his mother, who died a year ago. It may be solace to know that we all inherit our mother’s heartbeat, so a bit of her always lives in us and our children.