US news on this 4th of September, 2018, has all to do about justice. And how the current president of the USA apparently refuses to accept the plain fact that  the judiciary must be independent.

“He was consistent about this throughout the campaign,” says political commentator Carrie Cordero (Georgetown U.), “and here we are two years later and he is still saying the same thing. If he could he would use the DOJ and prosecutorial powers and engage in political retribution and pervert the system of justice.”

Re. Ben Sasse (R-Nebraska) was clearer: “We are not a banana republic.” A lonely voice coming from the former law-and-order party known as the GOP. Paul Ryan had his usual “what-me-worry?” blinders on.

While most of Trump’s gesticulations are the circus component of the panem et circenses to hide some emolument agenda, I suspect, this business with the justice department does appear more sinister in its consistency. It is literally anti-American and a serious threat to democracy as we know it. Why? Because he seems to think that a president should have unrestricted power to go after the opposition, and we now know that Trump can suffer no contradiction without going ballistic. 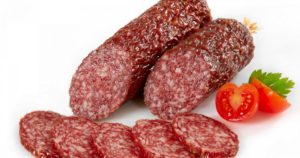 I’ve written about it before. It closely resembles how the Moscow Communists took over Hungary between 1945 and 1949, a process known by historians as the salami tactics. I am sure his former advisers Steve Bannon (a self-proclaimed Leninist, though that may just be to shock the sycophants) and Sebastian Gorka would know about this.

“Salami tactics, also known as the salami-slice strategy or salami attacks[1] , is a divide and conquer process of threats and alliances used to overcome opposition. With it, an aggressor can influence and eventually dominate a landscape, typically political, piece by piece. In this fashion, the opposition is eliminated “slice by slice” until one realizes (too late) that it is gone in its entirety.”

Yes, it’s not quite the same, because the USA has institutions, etc…. but the Trump administration has been stuffing courts with partisan judges, and that is simply not healthy.

The real problem is deeper, of course. Democracy is a difficult system. All must participate, all must be well informed, all must be ready to compromise. It is not a winner-takes-all system. It is winner is gracious and shares the spoils, remembering that a large part of the electorate is not of the winner’s opinion. More at some other time.

Note number 2 on this 4th of September 2018: The beginning of the Kavanaugh confirmation hearings  to the Supreme Court, which will most probably put a partisan judge onto the highest bench in the land, where he can support decisions for some of the more extremist views of US conservatives.