An Adventure for the wrist

Watches can be a major investment. So naturally, many collectors, especially of more recent vintage (and notably in emerging watch markets) prefer to play it safe and buy a big-name timepiece.  These are more often than not excellent, solid, well-conceived watches … but they tend to overshadow some eyebrow-raising watxches with less PR power, ones that are rare, exciting, and will not break the bank, either. 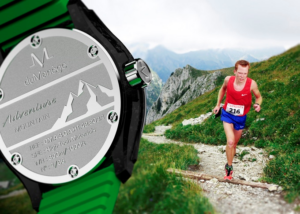 duManège comes out with a new watch

Here’s the short version of this story: You can get a well-designed, technically classy watch run on one of those brawny, automatic ETA movements: 42mm carbon case, stainless steel bezel, classy black dial and an elegant rubber/fiber strap for under $1000…. But only until July 29 on kickstarter. Here’s the link (Adventure), and here’s the rest of this story.

A week before Baselworld 2014, a friend called me to ask if I could quickly skim over a press release announcing a new brand. I can no longer count the number of times I get these ca 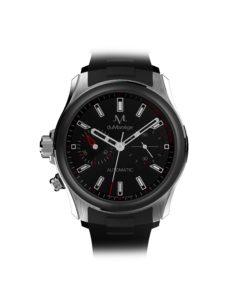 lls , but I’m happily not blasé yet, and my curiosity and inner do-gooder inevitably get the better of me. So I corrected a shabbily translated press release that did, however, describe quite a sexy timepiece called Exploration, I couldn’t help notice.  It also landed in the Masters & Mavericks section of  Wristwatch Annual 2015, described thus:

“…a 44.5 mm steel case made up of several components and black ceramic inserts, definitely sporty, but not on steroids. The coolness is in the details—the satin-brushed surfaces, contrasting polished beveling, open-worked hands, markers that shorten on the left to make way for the subdials. For complications, he chose a power reserve indicator—the two spring barrels of the customized Technotime automatic movement can drive the watch for up to 120 hours—and a retrograde date hand that takes up about one-third of the dial.” 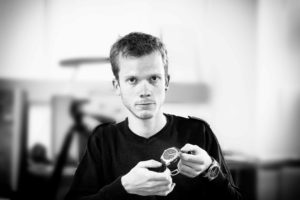 He is not a watchmaker, he told me off the bat.  He started his career in the jewelry trade but had studied graphic design. This did explain the very clear visual impact of the watches.

Businesslike, he explained his concept: He basically designed the watches and has them made by local artisans and friends from his native La Chaux-de-Fonds. They had helped him made the Exploration, and would continue doing so, he said confidently. 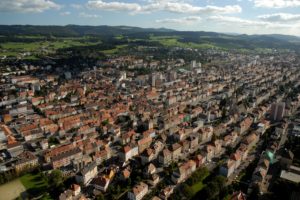 Having visited the upper reaches of Neuchâtel canton and the neighboring Franches-Montagnes (Free Mountains) a few times, I realized he was not kidding around. People have loyalties there, and Fleury’s family had, he told me as well, a pedigree reaching into the industry. He’s also a dyed-in-the-wool chaudefonnier  with a special love for his native town. “Watches that say Swiss made are readily available,” he said, “but none say ‘made in La-Chaux-de-Fonds.” This odd city is indeed one of the cradles of watchmaking in Switzerland. After a fire destroyed the old town in 1794, a new town was designed along the best lines for natural lighting, a boon to the watchmaking industry. This particularly impressive combination of form and function earned La Chaux-de-Fonds and neighboring Le Locle a place on the UNESCO World Heritage list.

And so, Fleury aimed to render unto Caesar, as it were, and thus rightfully put that trundling, hyphenated name on his watch dials between 1 and 3 o’clock.  His second tribute to “La-Chaux” was the brand name, duManège. The “Manège” is the town’s old riding school built in 1855. It was later used as low-cost housing for poorer families and became an architectural ideal of community living.

The start of a dynasty
Once all the technical, financial and biographical issues have been taken care of at my first meeting with Julien Fleury,  there remained my key question for any new brand:  What are the plans for 2.0, 3.0, etc.. Because an idea in watchmaking is only as good as its subsequent generations. He assured me he had a concept, but he needed first to get his first crop into the market.

At any rate, I left the interview with an old quote from Le Cid  by the 17th-century French playwright Pierre Corneille: “Aux âmes bien nées, la valeur n’attend point le nombre des années.” The young Rodrigue, who goes on to duel a gifted swordsman, who had an insulted his aged dad, say s “To the soul well-born, the worth need not wait for years…”

Three years later, armed with better funding, Fleury got back to me with the Heritage line where he could use his jeweler’s talents, or tap into local crafts for a grand-feu dial or other decorative arts. He was even offering customized miniature painting.  It was a clear sign that his brand was here to stay. I made space for his watches in Wristwatch Annual 2018, including one of my favorites whose dial is covered in stylized fir trees in champlevé enamel. This  special chaudefonnier  art-nouveau motif reflects the local trees in that cold 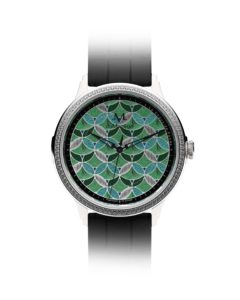 and snowy region. They are also a legacy of the city’s famous son, Le Corbusier.

A few weeks ago, Fleury wrote me with a new duManège product, a sleek, sober, technical watch again (the 42-millimeter case is made of carbon composite), with a definitively sportive feel and story. It is called Adventure, and is dedicated to those who, like Fleury himself, practice elite sports. This means: a three-hander, lightweight and robust, screw-in crown, water-resistant to 30 ATM, a big superluminova-drenched 6 and applique markers for the other hours that stand out sharply on a black dial with a dynamic ribbing pattern. The rubber strap also contributes to the active look, and comes with a coat of technical fibers and color stitching according to the model. Time here is driven by a robust automatic ETA  2824-2.. 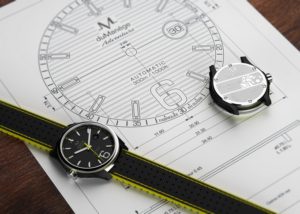 A watch for all reasons: duManège’s new Adventure is funding sports and athletes

The watch comes in six different models, each dedicated to a separate activity, which is identified by a color code appearing on the second hand and stitching on the strap. Ball is yellow and stands for football (soccer); Slide (blue) for tobogganing;  Fight (white) is for martial arts, while Military is khaki obviously;  Motor is red for motor sports, and, finally, Mountain is green. 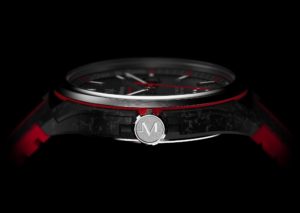 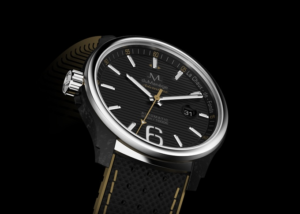 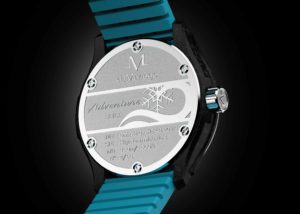 Twenty percent of the sale of each watch will go to a designated sportsman to help him on his way to success. These include Swiss bobsleigh driver Yann Moulinier (from La Chaux-de-Fonds) , who’s making a bid for the Olympic Games (Slide); soccer player  Neftali Manzambi, training to make it to the national team (Ball);  Ludovic Soltermann, Prestige Class motorcycle driver (Motor); Zakaria Khelil, a kickboxing and Muay-Thai specialist (Fight).

Getting it
These watches will be available online for chf 1390 (for dollar price, check the daily exchange rates), but Fleury  has started a kickstarter campaign to get them produced by the end of the year. His deal: Buy one through the crowdfunder, and get a 40% discount….