The genius of Paul Gerber 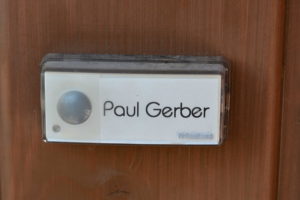 You haven’t heard this one yet: Four top experts, a micro-engineer, an industrial designer, an artist with a specialty in metalwork, and an accountant walk into a bar. And the barman says: “So, Herr Gerber, what can I serve you today?”… Add a really smart kid, but that would be getting ahead of my skis…

A slightly flippant joke like that above may not be the most dignified way to introduce a giant of watchmaking, but the real cognoscenti will know that the punchline is pretty accurate. This was confirmed to me during a brief and – as usual, fun – visit with him and his wife Ruth during the Easter break. Let me backtrack for a minute. 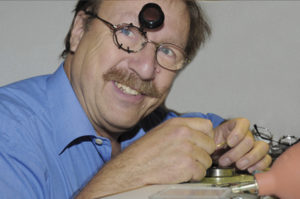 In case you don’t know Gerber too well or at all: Bernese by birth, but living and working in Zurich for nearly half a century, he has had his platinum fingers in the mechanism of many a great watch or clock over that half-century plus. Amongst his global creations is, for instance, the cool-calm-collected MIH watch made for the Musée Internationale de l’Horlogerie in La Chauds-de-Fonds. Two of his pieces have been in the Guinness Book of Records. One time was for the smallest clock made of boxwood, another for one of the world’s most complicated watches. It was originally a fairly simple pocket watch made by Louis Elysée Piguet in the early 20th century, but a new owner, Swiss entrepreneur Willi Sturzenegger (the “Earl of Arran”) decided to soup it up… Gerber also makes watches under his own name: they are easy to read, and with small touches of genius, such as a dizzying triple rotor. It’s Gerber’s understated humor coming out, a necessity for his version of “innovation.” 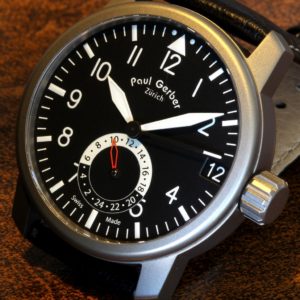 At the end of August 2015, I had the great luck to spend a few intense days with Paul Gerber and his wife and comrade-in-arms Ruth.  The occasion was one of his watch seminars, during which me and two other gentlemen were coached by Gerber while we took apart an old Unitas, changed the mainplate, decorated it, and put the whole thing back together again in a special case. The details of this exciting process, and the depth of learning can be found here

At the time, I had already developed a deep respect for this dyed-in-the-wool watch-genius. Nothing in his surroundings or demeanor suggested the extent of his know-how and experience. He seemed more akin to some regular Joe, puttering around his little den-like workshop in the basement of his modest house on Zurich’s western edge. But the three-day workshop, besides deepening my knowledge of the art, was also full of wonderful discoveries, tiny clocks, machines, movements he’d rebuilt, gadgets and gismos, and lever arch folders stuffed with thousands of pages and images fastidiously documenting the work of a lifetime.

We met at various events since, and each time he extended a generous invitation to drop by. Casually.  And so, earlier this year (2018),  I was able to finally take up Paul and Ruth Gerber on their invitation. 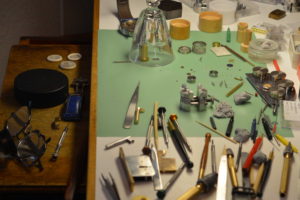 The real-life workbench of the genius.

It was a sunny day. But no sooner had I arrived, than Gerber took me to his workbench in the den-like basement. The operational word is work: The space is covered with motley items he uses to operate on watches, screw drivers, tweezers, bits of gummy stuff used to pick up tiny screws, a quadruple oil dispenser. There was also a broken wine glass he uses to protect parts from dust while they wait to be assembled. Most industrial watch workshops have elegant cheese bells: “I’ve had this since I started,” he pointed out with a mischievous smile. Gleefully he showed me a device he’d built… just to sharpen screw drivers. “The others don’t work well.”

But the pièce de resistance was undoubtedly a tiny ring-shaped part of silvery metal, stainless steel I assumed, which he picked up with a pair of tweezers and held up to the light.  I had no idea what it was. He explained forthwith: It was the frame of the watchstrap moon phase he’s made for the MIH watch. 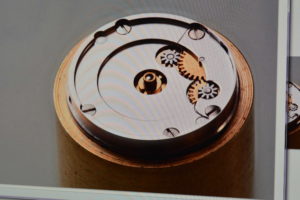 The story behind it was typical Gerber: A customer had wanted a moon phase on his MIH watch and rather than clutter up the dial of the minimalist watch, he decided to sink a small, battery driven moon phase into the strap, an innovative idea, if I ever heard one. 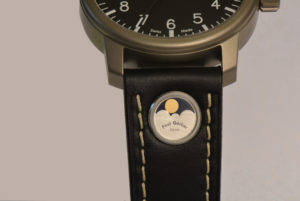 We were supposed to go out for lunch on this, the first real day of spring in 2018. But I had brought a big jar of mustard and spontaneously suggested it would be a great day to grill cervelat and enjoy the garden… Gerber seemed relieved, and I was to, and Ruth immediately set about organizing the lunch, while Paul disappeared somewhere to grill the sausages.

(Chatty aside: Is there any Swiss family that doesn’t keep an emergency reserve of cervelat, that short, thick wiener-like sausage wrapped in natural skin (it caused a bit of a stir about eight years ago when it seemed Switzerland was running out of skin? I guess not.)

Over lunch, Gerber talked about his early days in the biz. The quartz crisis was raging at the time he was doing his apprenticeship. And so he began by opening a watch and jewelry shop. As he spoke, I had difficulty imagining this brilliant watchmaker discussing watch straps with walk-in customers, or confirmation gifts for thirteen-year-olds. And he confirmed my feeling: Being in his watchmaking den, with his fingers on the wheels, was more along his lines. He sold the shop.

A distant connection of sorts flash through my mind. Gerber’s enthusiasm with watchmaking reminds me of a sentence Max Büsser (see MB&F) has made into his company’s tagline: “A creative adult is a child who has survived.” Survived the constraints, strictness, rigidity,  Gradgrindish goal-setting of the so-called adult world.  This explains his desire to stay close to his work, at home, in his basement, rather than delve in the flimflam of communication and publicity. The marketing masters of our industry love to talk about passion, and urge their copywriters to do “emotion.”  But Gerber does not perceive and then act in the spirit of passion (conjuring Hume, here), he just lives it as a cellular impulse. His rationality then steps in and tells him how to implement it in the 3D world. 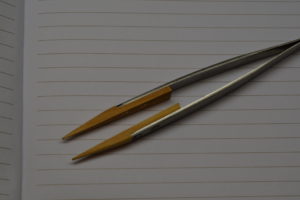 I mention a young  unemployed watchmaker I know, who has restored some surprisingly valuable watches (an Omega Seamaster, among others), and the  conversation drifts towards old movements and replacement parts. You’d think it is extremely esoteric and a little dull, but it’s not. Not when Gerber talks about it. It’s more like Wilhelm Kempff talking about piano strings or felt hammers. And so I learn that watchmakers who’ve started cranking a heavenly topping tool often leave a treasure trove of bits and pieces, sometimes even entire movements, for the next generation. These end up in flea markets, or are picked up by other watchmakers to fiddle around with. And are then passed down or end up in a special timepiece that may or may not be sold. More likely than not, it will end up in the recycling container. Gerber has his own collection of composants trouvés, as it were. 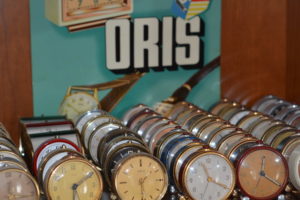 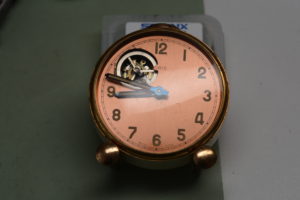 I thought his big hobby was fly-by-wire planes…. But after lunch,  Gerber steers me to a display case in his living room containing  one of his own collections.  Standing  on a shelf like little soldiers, are a battalion of old Oris travel alarm clocks, the ones that folded up into a hard shell, a clever design. Just for the heck of it, he built a functioning tourbillon into one of them. At some point, virtuosity is the key that unlocks total creativity, sort of like Picasso drawing Gertrud Stein as graffiti on a bathroom wall.

He had more to show me, down in his Ali-Baba’s cave, The Basement. Bellies full, we browsed through pictures of his special car, a Fiat 600 Multipla from the late 50s, adoringly restored. Interesting: Many watchfolk I know have flashier vehicles, but this one has personality… He dug up some mechanical place-name holders that show the diner’s name when a lever was depressed. I asked him about the amazing Earl of Arran watch, and he dragged me – where I had sweated for three days two years earlier decorating that Unitas movement – was a large and beautiful box with a leather insert, for the latest iteration of the (see the article on Paul Gerber, P. 1). 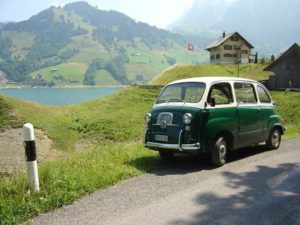 Flashiness is in the extraordinarily special design of this icon of Fiat.

Back in the basement, he shows me the large gearwheels he finished for one brand we shall keep anonymous. He dismisses the actual model they were fitted into with a sly, deprecating smile. But those gearwheels …. beveled to perfection, inside and outside edges, including the corners, which are exceedingly tricky, the three wheels displaying forty (40!) surfaces for his rock-steady file to transform from mundane metal to watchmaker perfection.  And that, for several models…  He also pulls out a thick folder to show the details of the order. Everything is documented, beginning with sketches, down to the last screw. That’s the book-keeping part. It’s a key to maintaining continuity; it’s a gift to future generations.

I think full circle. When I first left Gerber’s cavern a few years back, I thought hard on what elevates some watchmakers to the highest rank.  It’s not just the achievement and portfolio.  The challenge is this: Watchmaking taps into all sorts of fields. In addition to engineering, material science, gem-setting, enameling, a top-notch watchmaker will know history, navigation, astronomy, theology, philosophy, esthetics.  They are Renaissance people, they are the great (sea) venturers, to borrow a term from R. Buckminster Fuller, who required “…great anticipatory vision, great ship designing capability, original scientific conceptioning, mathematical skill, (…), able to command all the people in their dry land realm in order to commandeer he adequate metalworking, weaving and other skills necessary to produce their large complex ships.”1

The era of  the master visionary and  maker may be dead and gone in many other industries, but to create a beautiful watch, like composing a beautiful string quartet, you need a Beethoven, a Haydn, a Brahms, not a committee of brainstormers dreaming up target groups. Gerber is up there with the giants.

One Response to “The genius of Paul Gerber”