Success-iness is next to ugliness (short version)

For those who do not like to read much, here’s a short version of a longer lucubration on the topic of online invective  as it currently stands… : 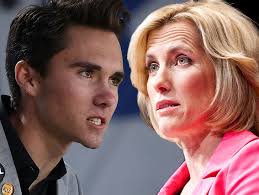 What drives an adult mother like Laura Ingraham to write ad hominem tweets against a 17-year-old expressing (articulately) his opinion? What drives an adult representative like Ted Nugent of the NRA to hurl very crude and incoherent invective at the same kid? Their argument might be “They did so first…” which is not an argument.

So let’s continue: Why does Lou Dobbs, of Fox News smile glibly when a guest of his literally paints a target on the Parkland students’ back, saying the students are acting “as if they are bulletproof”? By the same token, what drove an adult father of several kids (four, I think), to call retired SC justice David Souter a “goat fucking child molester”? The latter is Erick Erickson, and he was also the author of the following gem: 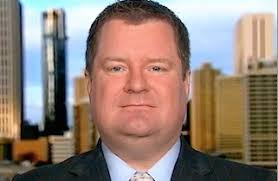 “Barack Obama, like Elliott Spitzer, is a creation of the liberal media and, as a result, could be a serial killing transvestite and the media would turn a blind eye.”

The list could fill pages, and you’d be astonished, it is mostly fed by family-values, PTL-ing, “patriotic” so-called conservatives. Their invective is shocking, extreme, and very divisive. And it is meant to be. But it is no longer ideological. Empowered by ratings driven by a critical mass of angry Americans, who can’t stand the inevitable changes* in our society, or who simply hate being told what to do even if it is necessary, these immature, unsavory salvos have become the artillery in the cold civil war dividing the country. 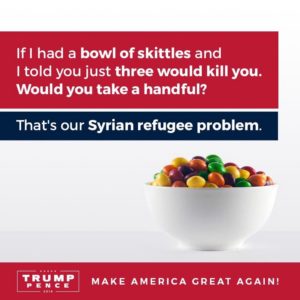 A repulsive attempt at smearing refugees, authored by the son of then candidate Trump.

And those uttering them, or the organization and companies backing them, are making lots of money out of it. Just as they are making money out of silly conspiracy theories. It’s turning into blood money of sorts, as the victim may well be democracy itself. Fighting back against it is tough, because the Internet offers them a bully pulpit with an unbelievably wild reach for their investment, and it protects them from having to listen to counterarguments. The only thing that counts is cash. Amazingly, a 17-year-old kid understood that. His slightly snarky suggestion about puling ads was hard. Advertisers do not want to be associated with such shabby people. It’s bad for brands.

*Believe me, I don’t like them at all, but they are there, and we have to learn to live with them. The good ole days are just that, good ole days. Weep and move on.

2 Responses to “Success-iness is next to ugliness (short version)”