… a trace of Calvinistic resistance to easy pleasures remains, and it is found on the festive tables amidst the smoked salmon, foix gras, oysters, calorie-laden bûches (the French pastry Yule log) and various wines. There you’ll find a delicacy whose rewards are only revealed and delivered after a long and arduous journey.

A look at a specialty on Geneva’s Yuletide tables.

One cannot help but think that if the Latin influence were not so strong in Geneva, Christmas might not be such a jolly affair in the city. Indeed, when dour and sour Calvin turned the place into a theocracy from about 1541 onward, with his rigid laws and set punishments running all the way to death by burning or drowning, he set a course still felt to this day. Among other things, he made fun and games anathema, and so Genevans had had to find ways to make merry without irritating already naturally irritable ghosts and deities. And his staunch hatred of bling meant that the local jewelers had to find a new way to practice their art: clock-making… But that is not the subject of this post…

Calvin prohibited anything and everything that could be remotely fun. Carnival is not celebrated in Geneva, for example. Calvin even went as far as prohibiting Christmas as a feast of idolatry and for a few hundred years after, the Genevans did not celebrate the Birth of Christ, Prince of Peace…Tell that to the wind machines ranting on about the fake “War-On-Christmas. What the city does have is the somewhat extreme and boisterous annual celebration called “Escalade,” the commemoration of a skirmish between the (Catholic) troops of the Duke of Savoy and the (Protestant) Genevans came right before Christmas 1602 on the Gregorian calendar. It comes along with fancy dress parties and general rejoicing and chocolate cauldron consumption. I have described this otherwise insignificant event outside Geneva in an earlier post.

All this to say: the influence of Calvin is still felt in Geneva. Ultimately, however, the Genevans did goback to celebrating Christmas. The city gears up in November already with wonderful lighting arrangements in the leafless trees, and shopping becomes more frenetic. But on Christmas Eve or Day, on the festive tables, amidst the smoked salmon, foix gras, oysters, calorie-laden bûches (the French pastry Yule log) and various wines, you’ll find a delicacy whose rewards, like Calvinistic grace, are only revealed and delivered after a long and arduous journey.

The item in question is the cardon, in English cardoon, in Latin Cynara cardunculus, a thistle-like plant related to the artichoke found occasionally in the wild in Mediterranean regions and elsewhere.

Cardoon character
At first glance, it looks like some irksome and resilient weed requiring immediate annihilation. So, as with the olive and several other labor-intensive foods, one must marvel at the first people who figured out that the cardoon is edible and that it has a wonderful artichoke-like flavor with just a hint of bitterness and a fine texture.

It also has history. The Mediterranean people already cultivated it in antiquity. According to lore, it was Protestants from the south of France who brought it to Geneva following the revocation of the Edict of Nantes in 1685 that deprived France’s Huguenots of their religious and civil rights. These families settled in the so-called Plaine de Palais (where the Bastions and National Theater is today) and continued cultivating their cardon, refining over the centuries to make it – guess what – even more thorny (épineux). Today, the “Cardon genevois épineux” is actually the only Swiss vegetable with a protected designation of origin. 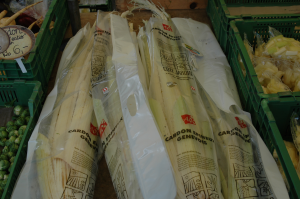 The slothful – Catholics, perhaps… no offense – will buy the vegetable already prepared, cut into short segments, and packed into large jars or in vacuum packed bags for up to CHF 15 the kilo. The self-respecting Genevan will purchase it fresh for about CHF 5 per kilo from one of the famed local market-gardeners (maraîchers) at any outdoor market.

You can’t miss it there: imagine a pale yellowish, oversized celery with a thick root. Occasionally they come stuffed in a plastic bag, not very ecological, but it will protect your hands from the thorns. 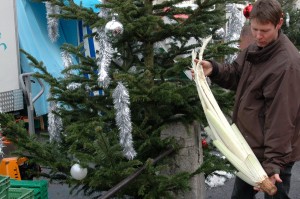 Taming the wild cardoon
From seed to table, the cardoon is all about the sweat on your brow. 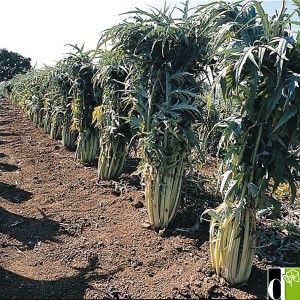 A few years ago, Pierre Gallay, a gardener, explained the cultivation procedure to me. It’s sown in May and grows quickly in summer. In autumn, the leaves on each plant are folded up to promote natural bleaching. In November each cardon is then uprooted by hand along with some earth and put into cool cellars where it continues to grow and bleach out without risking frosts.

Geneva produces about 130 tons of cardons per year, according to the Association of Plainpalais Interests. These Genevan heritage enthusiasts also point out in traditional Calvinist style, that with its fibers and low calories, it is the perfect counterpart to the prandial “abuses” of year’s end.

To prepare it, shave off the thorny edges. Then peal the stalks as you would rhubarb or celery, pulling off the stringy ridges and skin.

Cut up into inch-size pieces and tenderise overnight in a milk-water mixture. Then boil in salty water (about 30 minutes) with a dash of milk. Dress with cream (yes, but double cream from Gruyère) and pepper, or use the liquid for a béchamel to cover the cardons, sprinkle with Parmesan or Gruyère and bake till the cheese is a little crispy. You are now a step closer to being Genevan.