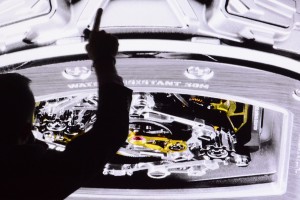 The 26th edition of the SIHH closed its doors recently and so it is time to take a look back over four plus days of watch-watching, of receiving the skinny on the latest models from the brands, and of sharing ideas, views and some minor scoops with colleagues in the hallowed halls of the SIHH, the Salon International de la Haute Horlogerie in Geneva, Switzerland.

First and foremost, the big news much appreciated by many of the invited guests present (and surprising to some of the extramural journalists, who tend to know only the really Big Brands): This year the SIHH welcomed nine sort-of independent brands into a square space called “Carrée des horlogers,” which loosely translates as Watchmakers’ Plaza. That is not too many, mind you, but among them were some of the most genuinely innovative, not to say wild and wooly, players of the industry. Urwerk, check! MB&F, check! HYT check! Christophe Claret, check! And more, but let’s get ahead of ourselves.

The effect of these dashing horological beatniks was shattering, to quote an old British vodka ad. Just imagine, one minute you are enjoying the smooth presentation of the Baume & Mercier collections, which are geared towards a generation of up-and-coming young adults moving about a connected world, but still engaged in human-to-human activity. The Petite Promesse with its doubly-wound bracelet is indeed a cute piece, and the Capeland Shelby Cobra is a solidly attractive chrono even for those not necessarily enamored of automotive “sports” – interestingly, it avoids lots of ostentatious Ferrari red in favor of a less familiar black dial with yellow hands, tachymeter and strap pattern. 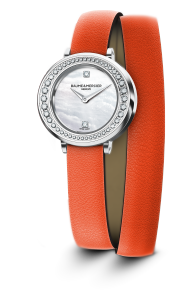 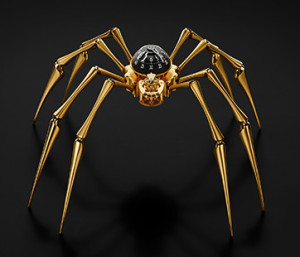 comes the next minute, figuratively speaking:  MB&F’s Charris Yadigaroglou – jeans, casual jacket, cool-chic, good baritone, fluid movements – clicking us through the history of the rather fascinating non-brand brand, MB&F. We glimpse the “old” HM1, almost tame by comparison to the more recent “objets d’heure.” The LM Pepetual comes on the screen and creates an immediate connection between the tradition of watchmaking and one of its modern interpretations: the calendar has conceived from scratch by Irish watchmaker Stephen McDonnell (see HM1) to reduce the risk of breaking the system. In fact, everything about the LM Perpetual looks traditional, from the regulating screws in the flying balance wheel, to the hour and minute dial that recalls a standard church tower clock, the ancestor of our wristwatches. But as MB&F has it, the watch looks as if it had been turned inside out, the way one would an orange half.

Tradition, we are reminded, means tending to the fire and not worshipping the ashes, to paraphrase Gustav Mahler. Even MB&F’s own creations are not spared a relaunch, no pun intended for the Space Pirate, which now comes with a sapphire covering that allows a look at its intricate mechanism.

Explaining the inspiration behind some of the spectacular creations of from MB&F, Charris is flashing images of the outlandish US “streamline modern” designs from the 1930s, including the famous greyhound busses with their hard snouts and somewhat Neanderthal foreheads – and their terminals– cars with flowing fenders, or looking like silverfish or huge woodlice, buildings that visibly tried to add some roundness to masculine rigidity, in sum, things reminiscent of the great Buckminster Fuller.

The collaborations with the French company L’Epée to create table clocks of a Third Kind come up as well. I have written about Melchior i 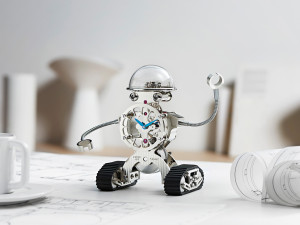 n Wristwatch Annual, but there is also Arachnophobia, the huge spider with a time-keeping body, and now the Sherman, named for the tank: Its hands can be positioned at will, the “feet” are caterpillar tracks, of course. Just imagine, you can hang a sign on it saying “No!” and push it into the range of your webcam while Skyping.

To fit the tight schedules, the Carrée brands did their very condensed presentations in bunches. Along with MB&F,  we heard from Christophe Claret, whose very technical, somewhat dry presentation contrasted sharply with the magnificent complexity of his watches. But then again, he is the man behind such noble experiments as the Aventicum and the X-TREM-1, which uses a magnetic field to control free-floating metal beeds in two lateral tubes. Quite strange, considering the effect of magnets on some watches.

The other brand in the groupuscule was Urwerk. Felix Baumgartner and Martin Frei were already making unique watches back in the mid-1990s, when everyone else was fairly staid. The “cover” (or whatever you wish to call the plate that covers most of the watch) of the UR-105 T-Rex ihas a design reminiscent of delicate clous de Paris from a comfortably high-end Breguet, for instance. But these do make the piece look like a primeval beast, and being of brass, the “teeth” will develop a nice patina after regular wearing. By the way: the adjective primeval translates into German as the prefix ur-, as in Ursuppe, primeval soup, or Urwerk, the company’s own play on words (Uhrwerk is a movement, Urwerk, primeval movement or machine).

Forty-five minutes and a fast espresso later, you are in a darkened room, and a young woman in understated garb is soberly taking us through the latest Overseas models of Vacheron Constantin, classy watches at a classy price, watches that look great but will also fit comfortably under your sleeve. But before beginning its show, this quintessentially Genevan brand (which has been around for no less

than 261 years at this point) did have to reveal completion of the world’s most complicated (pocket) watch, a behemoth with several calendars, front and back, including a special religious calendar with a retrograde function to indicate holidays like Yom Kippur. an alarm function, minute repeater with Westminster gong… something well worth getting a feel of, though it was for a private collector. Reference 57260 can be discovered on the web at the VC site here.

After that orgy of complications, with eight plates and only Vacheron Constantin’s master watchmakers and God (both masters of time) knowing how many components, passing the Quai de l’Ile and Patrimony models in review felt breezy. The most complicated of these, the Patrimony Perpetual Calendar with moon phase remains an elegant piece of Equipment, especially in platinum, this year’s choice metal. Remionder: Itz is driven by the tried and true 1120QP movement, which is a mere 4.05 millimeters high (diameter 29.6 millimeters), giving the watch a total of 8.96 mm by 41 millimeters diameter. Not quite Piaget standards, but not something that will tear your sleeves apart either, or raise eyebrows, for that matter. 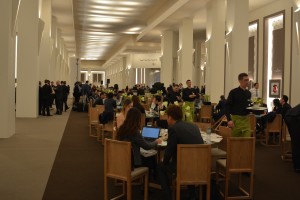 In fact, among most products presented by the main SIHH partcipants did maintain a fairly low profile. There were some , and some real innovations to be found, and some extra-strength complicated pièces, but let us take a break at this point.

SIHH 2016 part II coming up in the next week. Please come back for a second visit.