Nicolas Hayek died the way he probably wanted to, enjoying his daily leisure time at his desk in Biel. He was a grand entrepreneur in a class of his own. If anything came close to the art of business, it was what he did, and like all great artists, whatever he did seemed easy. Of course he could toot his publicity horn as much as anyone – did I say horn? I meant a five-manual organ –  but that is the business of truly loving your business. Furthermore, his grandson, Mark Hayek, once told me in an interview that his grandpa relaxed on Sundays by doing the books. His concern for his industries and the people working for him was genuine, and that is what made him one of Switzerland’s most trusted public figures. When he said “sustainability,” it was not just fig leaf stuff, it meant something, because he believed in it. Swatch Group managed to navigate the massive recession of 2008-2009 without shedding many jobs. That must have given Nicolas Hayek a feeling of success, if not elation.

As a journalist, one who keeps a very low profile, I was thrilled to be able to write about Nicolas Hayek following an interview he granted me at the Baselworld 2008 watch fair. I wanted to discuss his project for a solar-powered fuel-cell car. I was given a 20-minute slot and stayed 45. Within that short time span we covered all sorts of subjects, from his Marie-Antoinette watch, to green technology, passing by the Middle East. There are several statements he made that I have never forgotten, in particular his attributing success in business to a CEO’s ability to motivate workers. Ironically, at around the same time, I – who knows Pittsfield, MA, and the social and environmental disaster area left behind by GE in what was their company town – was asked to go to a press conference given by Jack Welch and write about Neutron Jack (the article appeared under the title Jurassic Jack). It was like listening to a Mahler’s 8th Symphony and following it up by chopsticks played at supersonic speed.

So without further ado ….  Nicolas Hayek as I humbly saw him. 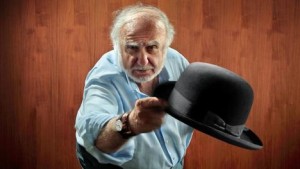 If an adult male would walk around saying he believes in Santa Claus, he would probably end up spending some time under observation at the nearest booby hatch. Or receiving medication, as befits our zeitgeist. But when Nicolas Hayek said so, ears pricked up, eyes lost their glaze, brains fine-tuned their reception mode. Not because anyone thinks that he really believes in some fellow with a beard and dressed in a red cloak distributing presents from a sled pulled by reindeers. Rather, Hayek, founder of Hayek Engineering, co-founder of Swatch Group and the impulse behind Smartcars, is revealing one of the secrets of his success as an entrepreneur. END_OF_DOCUMENT_TOKEN_TO_BE_REPLACED