The distinct sense of glee felt in some of the more vociferous conservative circles at Obama’s journey to Copenhagen to promote Chicago as an Olympic city must have come as a pleasant surprise to the president and his advisers. Just as a cat, once it has caught sight of a moving finger, will follow it almost idiotically, so the right-wing blogs and network started ranting before, during and after the trip. 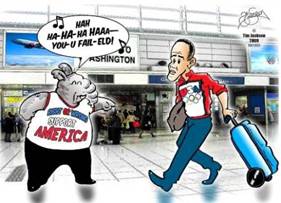 There was talk of Chicago’s ghastly crime rate, as if Al Capone was still shifting his weight around the windy city. And when the IOC picked Rio de Janeiro,  Limbaugh whooped, Drudge gloated, and Lou Dobbs punned rather irrelevantly about the ego landing. As for Obama himself, he was no doubt sincere in his effort to promote his home city as the 2016 site of the Olympics. However, as any good strategist, he probably weighed the risk of failure and realized it could also be beneficial in some way. The grand and overpaid network poobahs started balancing the whole of his presidency on one silly trip to Copenhagen. They must have been kidding. Or they are truly underestimating him and his advisers.

The first point to make, of course, is that there was only a 25%  chance that Chicago would be it. Tokyo and Madrid were also in the offing, along with Rio. Secondly, the USA already hosted the Olympics, in fact several times: Atlanta, 1996, and Los Angeles, which had the honor twice already, in 1984 and 1932.  If memory serves me right, no artificially manufactured anti-Olympic brouhaha emerged prior to the decision to choose these two cities. Thirdly, Olympic Games are very costly, even if they do give some cities an opportunity to clean up their façades and maybe build a new stadium at exorbitant costs. Munich, in 1972, got itself a state-of-the-art subway, a great concert and events venue, a wonderful swimming pool and some esthetically dubious housing. It – and Israel above all — also endured a tragic terrorist attack.  Other cities are not such happy campers financially. Check here for some stats. And finally, it was time for South America to draw the crowds, and let’s face it, Rio is a great place to party … though I wonder what the conservative pundits have to say about the crime rate there.

Hoist with their own petard

The point is, though, the right-wingers once again turned up the heat and started firing with every loud but irrelevant argument they could find, encouraged, no doubt, by the usual crowd of publicity-seeking baggers and birthers. My suspicion is that the Olympic gambit was in fact a fairly obvious rhetorical trap for this pathologically angry crowd of naysayers. In chess, a gambit is the sacrifice of a pawn (or a piece) in the opening to attain an attack or a stronger position. It does not necessarily mean winning.  Obama, in fact, could not lose. By going to Denmark, he was showing a high degree of commitment not only to Chicago, but also to the USA, since, barring the financial burdens, being an Olympic host is an honor, apparently. The argument that he has better things to do in times of crisis is ridiculous. If the average Joe or Jane in the US can travel and work wirelessly these days, so can Obama in the comfort of Airforce One. As for results, had the president managed to convince the IOC, he would have effectively silenced  – at last for the space of a lunch break – those who obsessively and compulsively rave against anything he does…. Now that Chicago was nixed, these über-patriots are clapping and cheering and jeering. What they’re doing, actually, is approving of a US defeat, an absolute rhetorical no-no …  They could not approve or commiserate, owing to their previous stand. They were in a corner and Obama simply let them impale themselves on their own weapons. Though I am not sure whether these people realize this at all. “To subdue the enemy without fighting is the acme of skill,” Sun Tzu dixit.

This might also explain Obama’s remarkable equanimity in the face of rather blatant and virulent attacks from the lunatic fringe-far right spectral range during the health care debate. It appears to be a tactic (I suppose there is really a will behind it) that he and his advisers often used during the campaign a year ago. For instance, every time Sarah Palin would start heating up the tin foil crowd with bizarre allegations that had nothing to do with the economy melting down, or when she allowed misfits to shout death threats against candidate Obama, support for the McCain-Palin ticket declined. She failed to see that most voters were not interested in conspiracy theory à la McCarthy. Obama would essentially wave it off as something fairly pedestrian. To see John McCain finally explain to some hysterical senior citizen that Obama is in fact an American citizen and an honorable man was almost poignant. Gradually, the opposition wound up on the fringe where it became highly identifiable. To this day, in those horrid forum comment fields, one can quickly identify those who are writing down the tinselly sounds in their heads fed by the far right, from Palin down to Savage. They keep repeating the same inHannities… Barack H. Obama, Acorn, socialism, etc… Tired old stuff that has about as much meaning as the muttering of some burnt-out preacher on Speaker’s Corner…

After Chicago, the professional ranters will find themselves increasingly sidelined, I suspect, perhaps even where health care is concerned. Which will not deter them, just as the Palin fiasco did not deter them from just adopting the better part of valor and keeping a low profile for a while. Sure, the health insurance debate is far from over and given the millions spent by the insurance companies to produce scare-ads and convince senators,   Obama may well fail to get the entire package. But he will get something from it, and be that merely clarity about who is who. The American people, apparently, want reform, some 47 million are uninsured and that is shocking in a modern, industrialized country. But rather than engage in reasonable deliberation, the opposition has hitched its cart to fellows like Beck, who are cynically playing the lunatic fringe for all they can, because there is money to be made in them thar hills. It’s hardly astonishing that the Obama administration is now seeking support from the GOP, particularly the governors. Schwarzenegger is more or less on board. What this sounds like is a kind of methadone program for sections of the GOP that have become addicted to the simplistic, borderline rhetorical bilge being thrown daily at the US public by self-seeking radio hosts.  If the GOP wants to win presidentials again, it will have to change some of its political planks and above all unload all the loose cannons, professional peddlers of political hallucinations and sundry buffoons at the nearest port of call.